The year has come to an end and now is a good moment to go over the main  Marketing Trends of 2016 and apply them to all sectors. Get to know what your competitive edge is to make the right decisions.

The list has been prepared by the Lifting Group, Strategy and Marketing Consultancy team, for Marketing Managers (CMOs) and to contribute innovation and new opportunities to promote sales over the coming year.

1. VIRTUAL REALITY IS INCLUDED INTO THE MARKETING STRATEGY

Virtual reality is the innovative trend that is revolutionising the marketing world. It is an excellent way of transmitting brand values and allowing the client to interact with it. Being original is the best way of generating engagement and, to do this, in any marketing strategy you have to look for something that makes you stand out from the crowd.

Virtual reality is an essential tool for attracting the attention of the user and differentiating you from your competitors. It is in 2017 that this trend is going to take hold together with the subsequent use and proliferation of devices such as  Oculus, HTC, Sony; a growth in sales that could reach up to 5 million representing an increase of 75%.

With the entry of new technology, media and digital platforms, advertising per se has been reinvented. Advertising in online Media buys audiences and not spaces, in such a way that you can offer the correct product to the appropriate person at the exact moment when it is needed.

Programmatic Advertising allows you to personalise the advertisements, offering different versions of the same product depending on the profile of the audience and context in which it is going to appear.

In 2016 Programmatic Advertising became a trend on the increase that, according to all forecasts, is not going to stop growing. 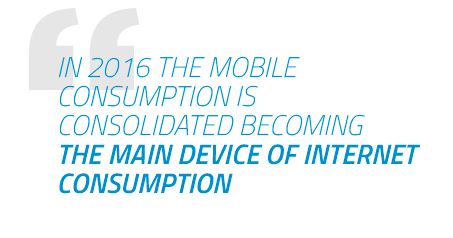 3. MEDIA MIX TO INTERACT WITH THE TARGET AUDIENCE MIX IS MULTIPLYING

The Media Mix to interact with the target audience is becoming more and more complex, in addition to traditional ,media, new channels such as browsers and new web spaces such as Digital TV, as well as new Social Networks the likes of Snapchat who are pressing hard on the accelerator along with the most frequently used such as Instagram, Twitter or Facebook..

It has been predicted that for this coming year communication campaigns must have content adapted to each Media type and achieve a synergistic affect to reach the target audience, having a greater impact and repercussion on the same.

4. CONSUMING ON THE SMARTPHONE IS ON THE INCREASE

In 2015 access to the Internet through mobile telephones peaked at its highest, relegating access through desktops to an even lower position.

As a consequence, in 2016 the trend of consuming via the mobile is on the increase, converting it into the main device through which the Spanish consume Internet. And is, therefore, one of the main focal points when preparing a  marketing strategy.

5. THE RISE OF THE SHARING ECONOMY. YOUR BRAND HAS TO BE THERE

Sharing economy is the latest, led by companies such as Uber, Airbnb or Blablacar. Sharing Economy is an umbrella term referring to all actions based on creating portals or social networks where individuals can interact on a massive scale.

In 2016, sharing economy became a new way of consuming and companies must adapt to it if they do not want to be left behind.

Video is one of the most effective formats for converting since it manages to attract attention and offers a more enriching experience to users.

51% of digital consumption in 2016 is made through mobile devices. This poses a problem for video format because the majority are horizontal with the subsequent loss of opportunity for the brands.

In 2016, the advances in technology and need for brands to adapt to their consumers, has helped to create what is known as “vertical video”, enabling it to be adapted to mobile format.

One of the biggest novelties in 2016 has been the integration of  e-commerce in the top visual social networks, such as Instagram, Pinterest or Snapchat. Instant access to buying from visual social networks is an opportunity that many SMEs have already started to exploit in 2016 and continues to be on the increase in 2017. 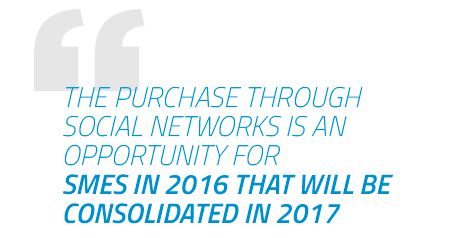 These are the most relevant Marketing Trends in 2016 and here in Lifting Group we are convinced that keeping them in mind will help you make more appropriate decisions in your Strategies for the coming year.

The influence of attribution models on the following results: How to choose the most suitable one for our Social Media strategy?

How to integrate Google Ads campaigns into Inbound Marketing strategies

Lifting Academy | Benchmarking, a strategy to learn from the best

Remarketing | And how to reconnect with your customers

Buyer Persona, the key piece for any Inbound Marketing strategy.

Marketing Consulting: Why is it so necessary to have a marketing strategy for your business?